Note from editor: This article is written by Adam Menon who lives in Taiwan and teaches Chinese. If you have any questions for Adam, feel free to post in the Facebook comments below! Enjoy our first guest post!……..

Let me introduce myself – I’m Adam, a Canadian who moved to Taiwan almost ten years ago to teach English (like so many others). While I was here, I tried to pick up some Chinese on the side. I figured that would be easy, since you hear it spoken everywhere you go in Taiwan. Plus there are Chinese characters everywhere you look, so even if I didn’t try, I’d likely pick up Chinese just by being here.

However after my first year passed, I realized that I still could barely say a word or two in Chinese. What was wrong with me??

Well, it turns out there was nothing wrong with me (thank goodness!). It’s the language – Chinese!

See, when most people learn English, they learn the alphabet (ABC) first. That allows them to read. So if you were standing in front of a bakery, you would probably know what that was in your own language. You would then read the word “Bakery” outside it and realize that was the word for it in English.

However in Chinese, characters come later (or not ever) for most people studying it, so all the Chinese characters we are constantly exposed to on a daily basis are actually wasted, since our brain ignores it all. And this makes studying Chinese that much harder!

After my second year, I decided that I was going to need to put in some effort on my own. So I started buying all the books, CDs and other learning Chinese material I could come across. They were useful, but there was a big problem. Most of the material out there to teach Chinese was created by native Chinese speakers. That makes sense, except that how westerners learn the language (coming from an English background) is different than how native Chinese speakers would have learned the language. As a result, the teaching methods needed to be different as well (which they aren’t!).

Many times I found myself thinking “If I was teaching the language, I would do it differently”. So eventually I decided – why not start my own course teaching Chinese – from the perspective of a foreign student? So I did! The result is my full Chinese language course for absolute beginners to intermediate learners – Chinese the way I wish I had been taught!

One great thing about the internet is that we have access to lots of material to help us learn Chinese. The problem is that most materials are either too difficult (eg. online newspapers) or too easy (designed for kids). CLO gets around this problem by being a progressive course. So the beginner lessons are all taught in English, with only a few new Chinese words taught in each lesson. Later lessons start to use Chinese, but only Chinese that has been taught before. So this way you’re forced to review the material taught before. If it gets too hard, just go back a few lessons until it gets easier.

Since our debut in 2006, our lessons have been downloaded millions of times by thousands of students from all around the world. We have partnered with local universities, expanded into iPhone apps and are currently working on a new version of the site that focuses on reading and typing. If you’ve been living in Taiwan for an extended period and haven’t made significant progress, then now is the time to join CLO. It will improve your quality of life in Taiwan by leaps and bounds! 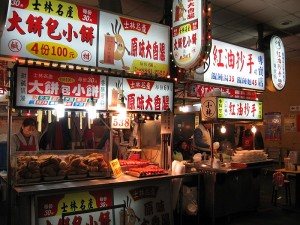