This is a guest blog post from TutorMandarin – an online Mandarin Tutor Service that teaches students how to speak Chinese using its best Chinese learning app and PC Software.

Taiwanese Aborigines are the indigenous people of Taiwan, who constitute around 2% of the island’s population. Research shows that they might have been living in Taiwan more than 5500 years. Throughout Taiwan’s complicated history, for centuries, Taiwan’s aboriginal inhabitants experienced economic competition and military conflict with a series of colonized government. Newcomers government policies designed cultural assimilation, language shift, and continued contact with the colonizers through trade, intermarriage, and other intercultural processes that have resulted in both the decay of their language and the loss of their original cultural identity.

Chen Di (陳第), a priest from Ming dynasty, was the first person to write a book recording the history of Taiwanese Aborigines. The book, 東番記 (Dōng fān jì), written in 1603, describes the daily life of Aborigines who live around today’s Tainan and its surrounding coastal areas. Chen Di used the term 東番 (Dōng fān) to describe the aboriginal inhabitants, which means “the undeveloped people from the east side.” Moreover, he called Taiwan by its Taiwanese pronunciation 大員 (Dà yuán) at that time.

About a century later, Qing dynasty ruled the island. The government changed most of the names of Aborigines, they use 生番 (Shēng fān) to represent those aborigines that did not manage by the government and 熟番 (Shú fān) was those in contrast. At the late 19 centuries, Japanese colonized Taiwan. They used 平埔族 (Píng pǔ zú, due to they usually live in the flat plant) to replace 熟番 and 高砂族 (Gāo shā zú, tribes live in mountains) to replace 生番.

At 1948 while Republic of China (ROC) ruling the island, the government canceled the term 平埔族 and divided 高砂族 into 9 people groups. After several rectification movements, Taiwan now has 16 people groups that are recognized by the government and we call them collectively as 原住民 (Yuán zhù mín,people who originally lived here). 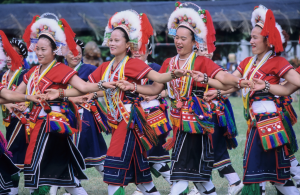 The Amis they have their own language called Amis, which is an Austronesian language. The Amis people identified themselves as Pangcah, which means “human.” In 2014, the Amis numbered more than 200,000, that is more than one-third of Taiwan’s total indigenous population. The traditional territory of the Amis includes the long, narrow valley between the Central Mountains, the Huatung Valley and the Pacific coastal eastern to the Coastal Mountains.

Amis is maternal society, family affairs including financial of the family decided by the female householder traditionally. The most important traditional ceremony is the Harvest Festival (豐年祭, Fēngnián jì). It shows people’s thanks and appreciations to the gods and to pray for harvest in the upcoming year. The Harvest Festivals usually take place every July to September, but the exact date depends on each tribe. Furthermore, there are several taboos for the Harvest Festival, for instance, sneezing is prohibited during the festival and also there are many events that women cannot participate. 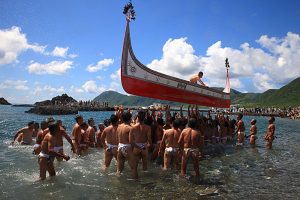 The Tao people, also known as the Yami People, are an Austronesian ethnic group native to the tiny outlying Orchid Island of Taiwan.

Composed of about 5,000 inhabitants, the island populace relies heavily on fishing for survival. However, the Tao’s people’s emphasis on fishing and ocean culture reflects their intense connection to the sea as being about much more than survival; they use fishing and the building of boats as an extension of themselves, and as a way to honor their spiritual beliefs.

The Tao people divide their year into three separate finishing seasons. Rayon is equivalent to spring and spans from February to May. This is considered to be flying fish season, during which the men catch fish for ceremonial use. Teyteyka lasts from June to October and signifies the end of the period of time in which flying fish can be caught on the surface. Finally, the Amyan season signifies the time of year spent waiting for the flying fish to return. This season lasts from November to January. During the latter two seasons, fish cannot be caught for ceremonial use.

A crucial component of Tao life centers upon the building of their fishing boats (拼板舟, Pīn bǎn zhōu). As a device used for their sole method of securing sustenance and monetary gain, they place great emphasis on the production of these boats. They join the wooden planks together with dowels and rattan. Once they have successfully constructed the boat, they carve patterns and paint them using the traditional red, white, and black. They then adorn the bow and stern of the boat with chicken feather decorations. The hull of the boat typically consists of three main patterns: the human figure, the eye of the boat, and waves.

Once the building of the boat is completed, the boat’s owner will host a large launching ceremony. On the actual day of the launching ceremony, the Tao people gather and slaughter pigs as a sacrifice, and the boat owner offers meat and taro to all of the families in his community. 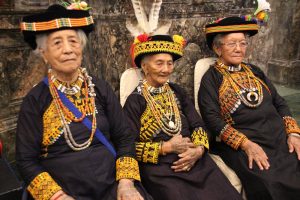 The Paiwan consists of approximately 18% of Taiwan’s total aboriginal population, which makes them the second largest indigenous group.

Unlike other peoples in Taiwan, Paiwan society is divided into 4 classes with a hereditary aristocracy, leader of the tribe, namely nobleman, warrior, and commoner. The Paiwan are not allowed to marry outside their group. On the day of their “Five-years Ceremony, ” (五年祭, Wǔ nián jì) Paiwan men try to cut down as many trees as possible and offer the firewood thus procured to the family of the girl they want to marry.

Tattooed hands (紋手,Wén shǒu) are a tradition of both Paiwan and Rukai peoples. Noble women used to receive these tattoos as a rite of passage into adulthood. However, since the Japanese colonial era, the practice has been less common as it was discouraged and fined during that time. 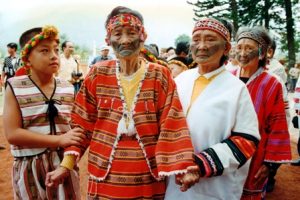 The Atayal people have a well-developed culture, they originally lived by fishing, hunting, gathering and growing crops on burned-off mountain fields. Atayal also practices crafts such as weaving, net knotting, and woodworking. The meaning of Atayal is “genuine person” or ” a brave man.”

The Atayal people are known for using facial tattooing (紋面, Wén miàn) and teeth filing in coming-of-age initiation rituals. In the past, both men and women had to show they can perform a major task association with an adult before they can tattoo their faces. For a man, he had to take the head of an enemy, showing his valor as a hunter to protect and provide for his people, while the women had to be able to weave cloth. A girl would learn to weave when she was about ten or twelve, and she had to master the skill in order to earn her tattoo. Only those with tattoos could marry, and, after death, only those with tattoos could cross the spirit bridge (the rainbow) to the hereafter. The Japanese banned the practice of tattooing in 1930 because of its association with headhunting. With the introduction of Christianity, the practice has declined and it is now rarely seen except on old people even though it is no longer banned.

We hope you will find this useful on knowing more about the different culture in Taiwan. If you are going to visit these tribes, here is the travel related conversations we can provide you!

Please include attribution to www.tutormandarin.net with this graphic.

4 thoughts on “Aborigines in Taiwan”