I had the most amazing night of my life last night! The Jay Chou Era World Tour concert in San Jose California on New Year’s Eve 2010 was amazing to say the least!! The concert was fantastic and well performed as well as having some of the most amazing costumes I have ever seen in my life.

Not only was the concert great but the staff of JVR Music were absolutely fantastic and some of the most friendly people I have ever met! Jay Chou was also super friendly as he even gave me a verbal “Hi’ in response to mine at his hotel! And believe it or not I was even able to take a photo with Gary Yang  楊瑞代 from JVR Music! (see below)

The New Year’s Eve Jay Chou Concert was the best possible beginning to any new year! JVR music has put together a great number of artists which not only include the wonderful Jay Chou 周杰倫, but also Gary Yang  楊瑞代, The Drifters 浪花兄弟, Cindy Yen 袁詠琳,  and Lara 梁心頤.

If you are not familiar with any of these artists please go to www.jvrmusic.com to learn more about them and to join their VIP fan clubs! The next amazing thing coming up for the great artist Jay Chou 周杰倫 is his first Hollywood movie ever, The Green Hornet which is hitting theatres January 14th!

Again, thank you very much JVR Music and Jay Chou for a wonderful beginning to my New Year! I hope to see you all again when I return to the great Island of Taiwan! Happy New Year to you all! 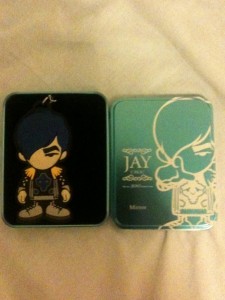